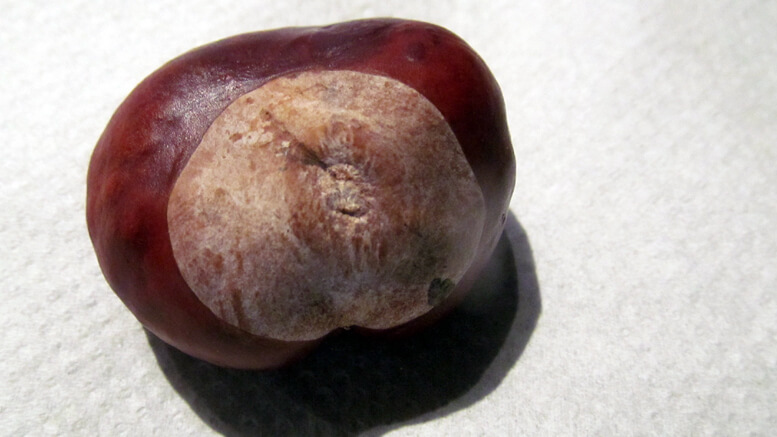 FIGHTING FOR SURVIVAL: Conkers - horse chestnuts - could disappear from the UK within a few years because of damage caused by caterpillars. Picture: (c) AsPerceived.

HORSE chestnuts may not mean a lot to those outside the UK, but for (mainly) males of a certain generation, having contests with the fruit, known as “conkers”, each autumn was a formative part of growing up.

Now, the tradition is under threat – because of damage caused by an insect.

The horse chestnut leaf miner moth attacks the trees internally – shrinking the conkers – and, scientists warn, threatening to kill more than two million trees across the UK by 2030.

One researcher, Glynn Percival, manager of the Bartlett Tree Research Laboratory at the University of Reading, was more pessimistic.

“Horse chestnuts have got maybe another five years unless we get the issues under control,” he told Horticulture Week magazine.

The consequence – that conkers this autumn are so small – has attracted international attention – with even the Toronto Globe and Mail reported on plight of the trees, with the BBC Radio 4’s flagship Today programme featuring a discussion about the long-term implications.

For those youngsters (of any age) for whom playing conkers is an essential autumn pastime, salvation is not far away however – as bigger conkers can still be found in France.

Although many of the trees show symptoms of also being affected by the moths and their destructive larva, scientists have been wondering whether those in Europe are hardier than those in the UK.

Conkers lying on the streets of the appropriately named rue des Bois (Wood Lane) in the city’s 19th arrondissement in late October were probably big enough to fulfill the needs of the most aggressive conker pugilist.