AsPerceived Quarterly is a ‘bookazine’ of informal, informative and entertaining journalism …. 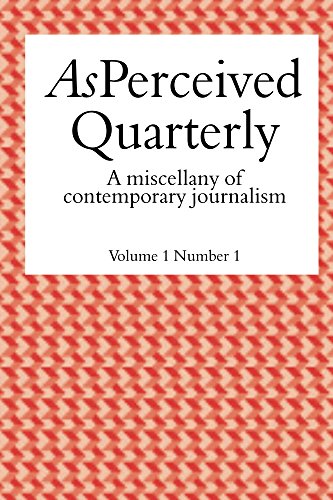 Towering Inferno: Vacuous and vacillating are words that have been applied to Donald J Trump, the Republican Party contender in this year’s US presidential election. Chris Aspinall considers how much is known about the man behind the mask and finds his own childhood provides an illuminating perspective.

Second-hand prose: Distanced from the action and reliant on others to tell us what’s going on around us, perception is all, argues As Perceived editor Adam Christie.

Called to account: Frank Bradford considers the public regard for politics and governance in the light of the EU referendum result in the UK, the death of Jo Cox MP and the implications for democracy.

Taking the Pulse: When 49 people are murdered, you’d expect compassion. Instead, intolerance, irrationality and bigotry were unleashed. If some views are so entrenched, asks Adam Christie, what is the cost for the future?

Subjugation Nation: Does the UK establishment elite have still to come to terms with the social transformation resulting from the 20th century industrial conflicts? Is an apparent desire for vengeance punishing the country with a return to feudalism?

Four shades of developing democracy: Michael Meadowcroft reveals some the tricks of the trade – and the risks involved – when new nations try to establish governments that should be both elected fairly and properly accountable to their peoples.

So you’re a journalist?: Adam Christie considers how perceptions have changed and what is involved for those trying to earn their livings as the news media evolves more quickly in the face of rapid consolidation of advertising.

Barking up the wrong tree?: Depressed? Or just miserable? Is the medicalisation of misery making it more difficult to manage? Jenny Vaughan offers a personal perspective.

Clubbing together to save our cities: Sharing the experience when running a car has much to commend it – as Jim Griffin has been finding out.

A Man for all Seasons: Life-long West Ham supporter Brian Williams tries to renew his season ticket as the historic London football club moves to a new ground.

Les temps perdus?: Adam Christie tempts fate by checking the accuracy of his memory after 50 years by visiting the Alpine lake where he’d been taken on family holidays half a century earlier.    1

A matter of taste: Trying to find a cup of unadulterated coffee revealed unfiltered cultural and culinary differences for Frank Bradford during a recent visit to California.

Rushing? That’s too much like hard work: Adam Christie admits that time may be of the essence but contends that 21st century humanity should learn from the Romans – and slow down.

Preserve your memories: A hundred years after the Easter Rising of 1916, Enda Shepard dreams about Dublin as he takes a surreal stroll around the city’s streets.

The sky’s the limit: Fly to the United States and the fare charged by your airline will include a fee for dogs. It’s there in the small print as Frank Bradford discovered.

AsPerceived Quarterly is the factual equivalent of an anthology of short stories – as a diverse and eclectic mix of topics and writing styles, from experienced journalists who know their subjects.

We hope that the mixture of the middlebrow and challenging will make you think (a little), perhaps say to yourself: ‘I didn’t know that’, ‘that was interesting’ or ‘that was fun’.

We want AsPerceived Quarterly to be polite and courteous but challenging and thought-provoking. We want contributors to have time to tell their stories at the length those stories require; so the writers are not aggressively edited and they have the scope to bring their own voices and perspectives to the tales they tell. Additionally, we offer writing about subjects that you might pass by in other newspapers or magazines.

By offering this material as either a paperback or an e-book, we want it to be available to you easily from a briefcase, purse or pocket or on a familiar screen, wherever you want and wherever is convenient. This does exclude  illustrations, but as those who work in broadcasting so often say: ‘on radio, the pictures are prettier’. AsPerceived Quarterly does require some intellectual input from the reader!

For commuters and travellers, these formats should provide access to long-form journalism without the inconvenience of dealing with broadsheet newspapers in confined spaces or heavy magazines counting against strict airline weight restrictions. Longer contributions allow those who have five minutes here or ten minutes there can finish an article without finding obliged to come back to it later.

We also want AsPerceived Quarterly to champion journalists whose work is rarely, if ever featured, in more established publications. Knowing what well-know writers and observers have to say can be fascinating, but it – and they – can also be predictable. Lesser-known writers bring with them less familiar perceptions but equally standards of writing and observation.

AsPerceived Quarterly is only viable if our writers are paid – so we have aimed for a cover price that is affordable. We ask you to respect our copyright by not photocopying and reprinting or scanning, saving and sharing electronically any part of the publication. If you would like extra copies of any one piece in any edition, please e-mail admin@ asperceived.com to make the necessary arrangements and discuss pricing.

AsPerceived Quarterly is not yet available from any retailers and may only be ordered online. To order the latest edition, please click here.