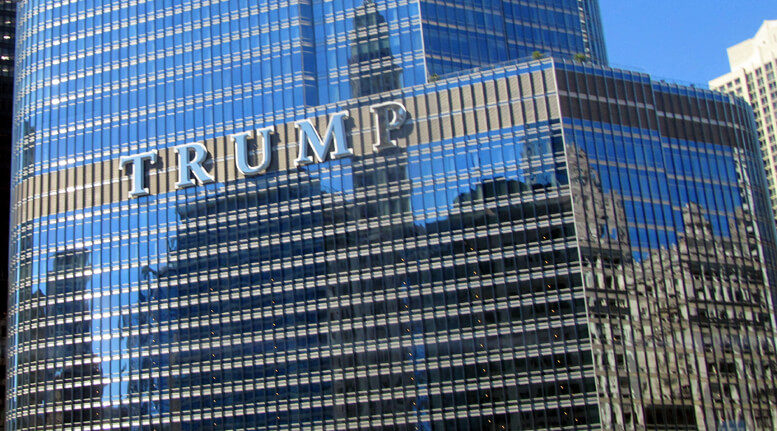 ON REFLECTION: Questions have been asked about the ego of someone who needs to put his name in letters more than 20ft high on prominent buildings. Picture: (C) AsPerceived 2016.

DONALD TRUMP’s chances of making any change to the United States whatsoever if he does become president are virtually nil – and he only has himself to blame.

Whatever remaining hopes he may have had of making American anything, let alone great (again), were dashed in yet another irrational fit of pique … further increasing the ramifications of despair when his supporters (eventually) realise he has made himself politically impotent.

Mr Trump seemingly personifies the widespread ignorance of government in the US – and his statement, as the Republican Party establishment distances itself from his presidential campaign, that he’s no longer fettered by their conventions – exemplifies this.

Any president who wishes to achieve major changes to the US (economy) needs the support of Congress. Mr Trump’s attitude towards the Republicans who could well be in both the House of Representatives and Senate is so hostile and his approach so unconventional that he could not automatically assume support on The Hill.

A stand-off between Mr Trump in the White House and GOP traditionalists in Congress would likely provoke an offensive shouting match that mirrors the presidential campaign.

From now on, a vote for Trump looks increasingly like being an entirely wasted vote

That so many of the US electorate do not seem to realise this confirms just how little so many Americans know about the governmental structure of their country.

For example, in interviews broadcast from Marblehead, Massachusetts, by the BBC, one woman accused Democratic Party nominee Hillary Clinton of having done nothing during “30 years in office”. Challenged, the woman said Mrs Clinton had been “in power” as first lady, a senator and as secretary of state, displaying no awareness whatsoever of the limitations of those roles or the difference between the executive or legislative arms of government. Arguably, none of those posts has any “power” at all, even though the incumbent may have some influence.

(In the early 1990s, during Bill Clinton’s first administration as president, the Republicans largely led the censure when, as first lady, Hillary Clinton deigned propose changes to healthcare in the US. The sexist impression that lingers is that they felt she should shut up and go back to the largely ceremonial functions associated with the role.)

Voters who have expectations that Mr Trump as president would be able to enact any change will have their worst fears confirmed – because they do not understand the system or the purpose of constitutional checks and balances in preventing (even elected) extremism.

Mr Trump seems equally unaware of the constraints on the office of the president. If that was not the case, he would already have appreciated the need to build the political alliances essential if he wants to get anything he says done.

He claims not to be a politician – and the veracity of that is becoming increasingly apparent. He gives the impression that this total absense of political savvyness is so great that he perpetually and immediately undermines his “outsider” justification for what he says.

Consequently, he has now managed to disenfranchise all his supporters. So, as many already take advantage of early voting across the US , a vote for Trump looks increasingly like being an entirely wasted vote – and endorsement of inevitable future disappointment, disillusionment and an even greater “disconnect” with government.