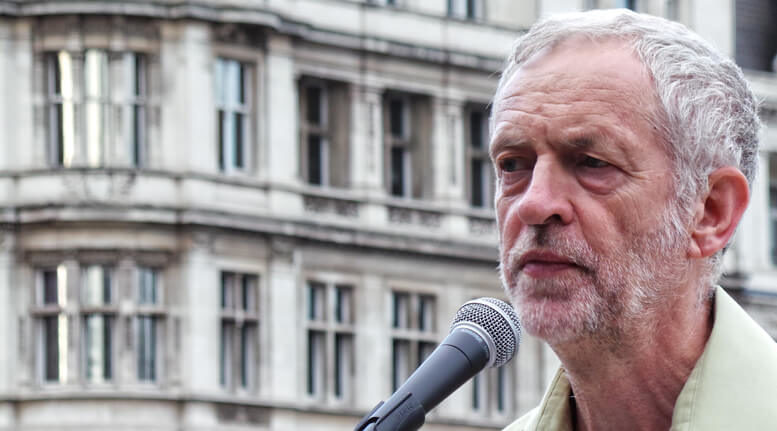 LEFT IN CHARGE: Jeremy Corbyn's authority within the UK Labour Party has been strengthened by his re-election. Picture: © Garry Knight (used under Creative Commons licence 2.0).

Posted By: As Perceived editors September 25, 2016

INTERPRETATION is all in politics – and nowhere is this more true than in reactions to the emergence of Jeremy Corbyn as leader of the UK Labour Party.

The year-long antipathy towards Mr Corbyn from members of the parliamentary party has increasingly looked like petty resentment. It may also be seen as passive-aggressive manoeuvring to try to protect the dying vestiges of temporary deviance from Labour’s deeper-rooted left-wing instincts.

While Tony Blair caught the zeitgeist of the 1990s and was swept into Downing Street in 1997 on a wave of optimism and adulation, he very quickly lost the respect of many of the left.

His government did introduce some socially progressive measures – such as standardising the age of consent – but for many it is now remembered for what was not done.

Within the first months of becoming Prime Minister, Mr Blair could have curtailed the dominance of some media barons; he did not.

During his tenure, he could have repealed Thatcherite employment legislation; he did not.

Most damningly, ‘new’ Labour’s business fetish led to the introduction of the Private Finance Initiative (PFI), truly a highly-expensive and an increasingly unjustifiable means of keeping public investment, largely in infrastructure, ‘off the books’.

Similarly, ‘new’ Labour could have brought much infrastructure back within public ownership, without huge expense. They didn’t do that.

The ethos of trying not to scare cardigan-wearing Home Counties (small c) conservatives seemed to become endemic. The architects of ‘new’ Labour – such as Lord Mandelson and those around him – gave the perception of giving greater priority to this negativity than any positive social progress.

The fear of the trade union movement was also seemed so great that, often against the wishes of local parties, the ‘spad-u-like’ tendency became all-pervasive.

‘Nice’ parliamentary candidates, often far more to the right than those who were given no option other than to accept them, came from ‘good’ schools, with degrees from ‘decent’ universities. They’d then gone on to work for think tanks or as political researchers before becoming ‘Special Advisers’ – or ‘spads’.

These policy wonks frequently had little in common with the communities they went on to represent and were – and some still are – perceived as distant and disconnected. They were regarded by the Labour hierarchy as infinitely preferable to union officials with decades of experience in dealing with workplace angst, redundancies, lay-offs, and the abuse still so prevalent in the underbelly of commerce.

The anti-Corbyn shrieking from the Parliamentary Labour Party since Jeremy Corbyn emerged as leader has been regarded by many as petty and petulant. The increase in party membership can be seen as indicating just how out of touch such MPs had become.

The Labour Party, per se, does not seem divided. It has become – in the face of increasing ‘popular’ moves to the right across Europe – more united in a determination to counter the xenophobia and division shouted by a right that gives the impression of being unable to cope with the global challenges of the 21st century.

The last year has shown that while the Labour Party per se seems to have got closer to ‘the people’, the Parliamentary Labour Party (PLP) has become even more remote.

The last year has shown that while the Labour Party per se seems to have got closer to ‘the people’, the Parliamentary Labour Party (PLP) has become even more remote.

This lack of perspective has – especially with the easy availability of social media – threatened, if not totally undermined, many long-standing media outlets as well as exposing individual journalists to challenge and criticism. (The entirely inappropriate and inexcusable vehemence and abusiveness has regrettably and too often undermined the otherwise valid points being made.)

PLP members who disagree with the half-million members of the party they purport to represent now face an easy choice; they can either do what they should be doing and represent those views or stand down. If they go, they’ll still collect generous parliamentary allowances for a while; they won’t entirely be penniless (although the job market for former MPs is becoming increasingly competitive).

Looking smart is not automatically synonymous with being smart.

Leadership challenger Owen Smith’s radio and television appearances and his comments to the media gave the impression that he was the epitome of everything outdated about ‘new’ Labour. Compared to Jeremy Corbyn’s comfortable rumpledness, his sharp suits made him look as if he was cosying-up to financial avarice, a man more at home in The City than the Commons or his constituency, whatever words came out of his mouth or wherever he went. Looking smart is not automatically synonymous with being smart.

Tony Blair is regarded by some as a Thatcherite. However unjust this generalisation may be and however much he may deny the charge, he currently seems to be carrying a right-of-centre millstone around his neck. Owen Smith seemed similarly to personify the last, dying, gasps of the ‘new’ Labour experiment that has – at least for now – failed so dramatically.

PLP whinges about a ‘party within a party’, referring back to Militant Tendency several decades ago, have also appeared hypocritical in the context of the Progress group. This, they seem to be saying, is OK – because it’s ‘moderate’ (whatever that means in the context) compared to Momentum, the grass-roots but further left congregation behind Mr Corbyn.

That the leadership challenge engineered by the PLP has also failed so disastrously for them, strengthening rather than undermining his position, can be regarded as a further demand from the increasing number of ‘ordinary’ party members that their stance, however comfortable in the Home Counties, is increasingly out of touch elsewhere.

The economics of the corporate media of the UK and US have unquestioningly boosted the fortunes of the right – be this manifest in Brexit or the transformation of a television showman to a nominee for president.

Labour now has a chance to provide a determined formal and informal opposition to this – but only if the Blairite dinosaurs of the PLP calm down and accept this new challenge. That so many of them seem unable or unwilling to accept this does them a disservice; it may also be even more socially, politically and economically destructive unless they adapt, quickly, loudly and very visibly.