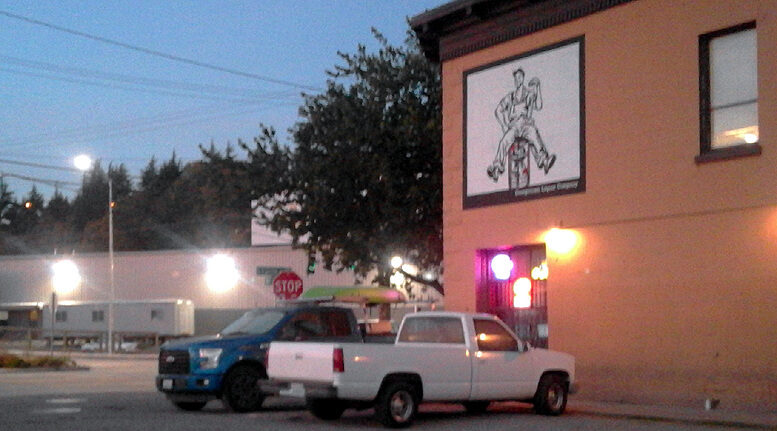 DIVING IN: Modestly situated on the edge of a Seattle industrial zone, the Georgetown Liquor Company has become a magnet for unpretentious vegans and vegetarians. Picture: AsPerceived.

THE edge of an industrial zone, opposite a ramp from a freeway may not be the classiest location, but for vegetarians and vegans, a modest neighborhood bar in Seattle is developing an international reputation.

The Georgetown Liquor Company has been called a ‘dive’ by its owners and local residents fiercely guard its lack of pretentiousness against invasions from the uber-chic. The ambience genuinely is workwear rather than ‘smart casual’; goth over Galliano or Gaultier for sure.

Although the art on display and the level of lighting can very easily and quickly alter the entire vibe – as various online images reveal – the essence is industrial. 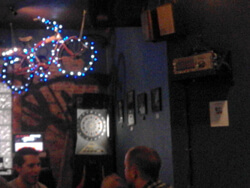 ECLECTIC: The décor of the Georgetown Liquor Company includes a bicycle decorated with rope lights hanging from the ceiling. Picture: AsPerceived.

The ‘cuisine’ is similarly eclectic.

The website announces boldly that the menu is ‘strong enough for a carnivore, made for a herbivore’,  but it is beautifully deceptive and a delightful find; far too many ‘cooks’ lack the nutritional nous to appreciate that vegetarians cannot survive without protein; their professional ignorance or the corporate myopia of their employers denying a significant customer group both sustenance and reason to frequent their establishments.

The Georgetown Liquor Company is refreshingly, wonderfully, different: the two guys running the small kitchen outpassed their rivals by miles in appreciating the importance of providing a dinner that’s truly healthy for the lower colon too.

The menu runs from tacos to enchiladas, amazing salads, artichoke dips, nachos, veggie burgers and amazing soups. The split peas was more like, to someone from the UK, mushy peas, the consistency was so deliciously thick, the texture as tasty as the flavour. The amazingly creative kitchen crew do call on ‘faux’ meat – but to great effect, satisfying (as the slogan claims) the palates of the carnivores as well as the herbivores.

Founded in 2007 by a guy who came to fame with a coffee table book about cats, the GLC’s industrial location maintains a habitat for wildlife, with feral rabbits appearing in the glow of the sunset to forage for food beside the railroad tracks that pass the door.

FRANK BRADFORD’s celebration of the Georgetown Liquor Company – Gourmet Grunge – appears in the latest editions of AsPerceived Quarterly, available as an e-book or paperback in US dollars or sterling.