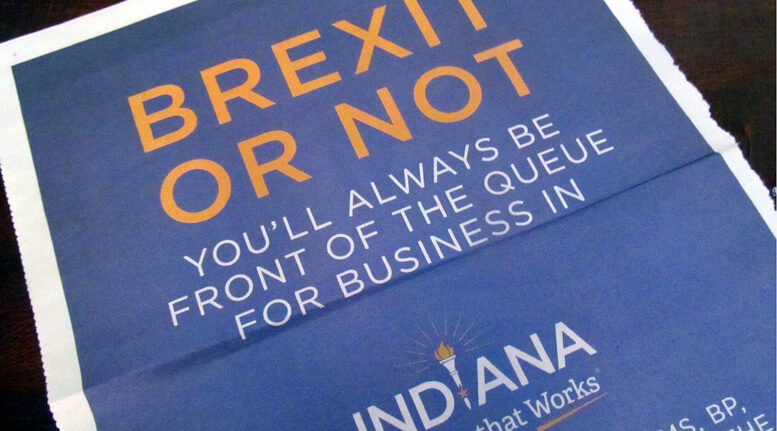 STATE APPEAL: Indiana taxpayers bought a full-page advertisement in The Times (of London) to try to attract business after the UK referendum.

COMPETITION has broken out to try to persuade UK businesses to leave the country.

The first to enter the contest with high-profile publicity operations were the US state of Indiana and Berlin – followed, less formally, by a regional administration in northern France.

Within hours of the declaration of the advisory referendum on the UK’s membership of the European Union, the German traditional liberal political party Freie Demokraten (FDP) had hired a billboard vehicle to drive round London displaying the message: ‘Keep calm and move to Berlin.’

The vehicle was photographed in Parliament Square outside the Houses of Parliament as well as in the City of London.

A journalist working for the Bloomberg news organisation posted a picture of the vehicle online, captioned: ‘The vultures are circling.’

Another website reported that several London-based technology start-ups had already said they were considered opening overseas offices since the referendum.

Keep calm – and move to Berlin

A few days later, the taxpayers of the US state of Indiana covered the cost of a full-page advertisement in The Times (of London) promoting an existing campaign trying to attract businesses – with the slogan ‘a state that works’.

The advert pointed out that major corporations such as Rolls Royce, BP, BAE Systems and Tate and Lyle were among more than 50 UK companies each having a presence in the state.

Quite how attractive such a conservative area would be to a largely liberal European workforce remains uncertain, especially as Republican presidential candidate Donald Trump shone a spotlight on the state’s politics by choosing Governor Mike Pence as his running mate.

The latest to enter the competition was the Mayor of Calais.

In a letter to the editor of the Dover Mercury, part of the Kent Messenger group of local newspapers, Natacha Bouchart suggested that businesses in Kent, the part of England nearest to the mainland of Europe, should open offices in France so they can all maintain their presence within the EU.

Mme Bouchart said that the UK and France had always found strength in unity rather than division, adding that UK enterprises could be lured across the Channel by ‘very competitive’ property prices.

‘Calais has the advantage of being a the crossroads of several of several strategic transport infrastructures,’ she added.

Mme Bouchard has also been arguing for a ‘Transmanche Metro’ of local rail services between international stations at Ashford and Calais Fretun – with a journey time of about 30 minutes.

The two regions of Kent and the Pas-de-Calais are ‘sisters, but they do not communicate enough with each other,’ she said.

Some entrepreneurs told the paper they welcomed greater links while others were dismissive, welcoming the post-referendum drop in the value of the pound as better for their businesses.

A key factor however seemed to be existing trade with the EU. Those with customers elsewhere may be reluctant to open new premises but if the view of one international pharmaceutical company is more widely representative then this may be a way to retain customers.

Having a small presence in the EU might, in the longer term, reduce the administrative cost for both suppliers and clients, said one manager.

Another observer of international trade noted that Ireland and Switzerland had also been actively trying to tempt businesses away from the UK while another commented that the FDP billboard truck represented the country that invented the word ‘schadenfreude’.