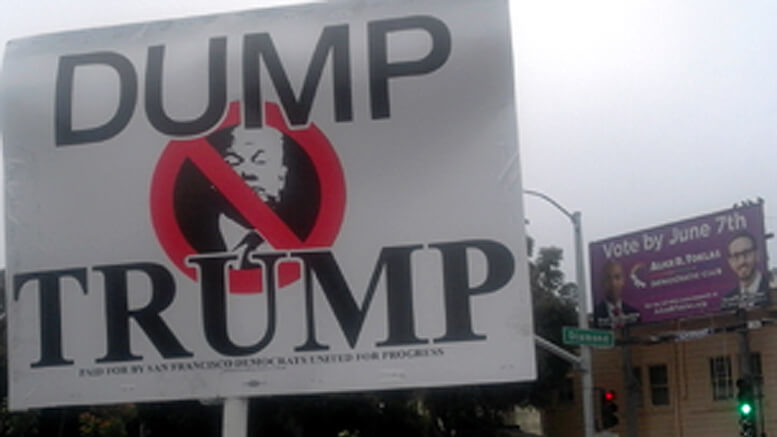 FORESIGHT: A political activist in San Francisco presents one view of Donald Trump ahead of the Californian primary in early June. Picture: AsPerceived.

AS an out gay man with Islamic friends, I find Donald Trump’s self-serving utterances after today’s slaughter in Florida highly offensive.

Mr Trump’s Sunday morning tweet – asking: ‘When will we get tough, smart & vigilant? – confirms that he has all the political acumen of an ostrich with his head in the sand.

The risk that the mentally deranged will kill is a price we pay for our other freedoms. Further repression and surveillance are not the answer. Gun control is. That is the single smartest, toughest and most vigilant move the United States can make to reduce the probability of similar incidents happening again.

The gun lobby may argue that anyone can kill with other weapons – such as knives. Sharp blades may kill individuals; they do not kill 50 in a single incident.

Reports that suspect Omar Mateen, 29, may have claimed links with Isis have provide that organization with the dreaded ‘oxygen of publicity’ which they were quick to exploit, whatever the reality.

Whatever individuals think of organized religion, Islam emanates from the Abrahamic tradition at the core of Judaism and Christianity. All but a very small proportion of its adherents are good, caring, law-abiding citizens who have done everything they can to disassociate themselves from the sacrilege of the extreme few.

Mr Trump’s Sunday morning tweet confirms that he has all the political acumen of an ostrich with his head in the sand.

Senator Marco Rubio’s comment that tighter gun control ‘wouldn’t have prevented the attack’ is equally loathsome and despicable. Proscribing firearms may not have prevented it per se but would so significantly have reduced the chances of anyone being able to buy weapons of war that such a mass murder would probably never have happened.

House Speaker Paul Ryan also blamed ‘Islamic terrorists’ – rather than the grasp the reality of so many guns being easily available.

From this perspective every politician in the US who has ever accepted cash or largesse from gun lobby is culpable.

If Mr Trump wants to show true leadership and establish himself as a potential statesman in seconds, he should immediately challenge each and every gun owner to hand in all their weapons and ammunition in a US-wide arms amnesty.

Even though one man can purchase weapons of mass destruction in the United States, this won’t happen. Omar Mateen’s resort to invoking the prophet or those who claim to be his most dedicated disciples has provided them with the political protection the US gun lobby needs to maintain its stance.

Whatever the complex psychological reasons that led Mateen (literally) to execute his plan, the responses from political leaders in the US has been shameful – and I dread more deaths as a misfit with a vengeance mentality runs amok within the coming days. 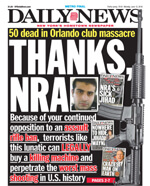 Pink News has condemned Mr Trump for trying to spin the day to focus on himself – while the New York Times (pictured left) on Monday lays the blame firmly with the NRA.