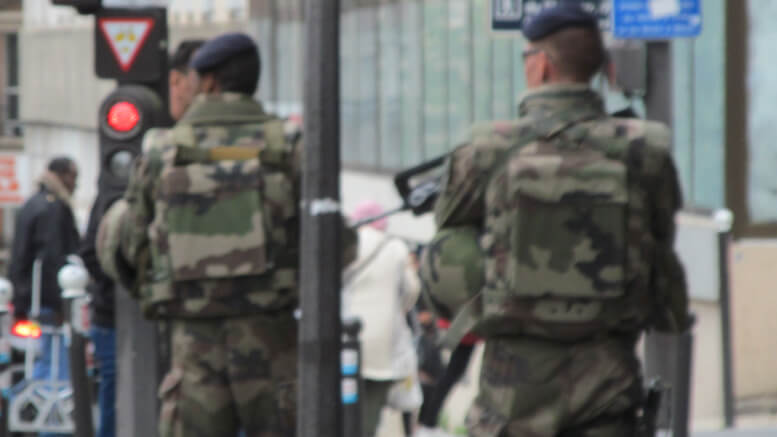 ARMED: Troops still patrol the streets and metro stations in Paris in patrols of three or four: Image: AC.

The city’s residents seem to have become accustomed to their presence, ignoring them as they pass morning shoppers outside a supermarket in one of the arrondissements just outside the heart of Paris.

Tourists however look more alarmed than reassured when they first see the patrols carrying loaded machine guns, fingers ready on the triggers.

Paris-based journalists informally report that businesses that successfully supplied the visitor market for decades have been closing at unprecedented rates as tourists stay away, months after the attacks on the Bataclan concert hall, killing 90, and in the northern suburb of Saint-Denis.

The annual Tour de France cycle race in July and the Euro 2016 football tournament in June are expected to attract huge crowds.

Despite this, questions remain about the effectiveness of such patrols and half-hearted checks by so-called security guards at the entrances to major retail areas in Paris.

Shoppers are asked to open bags and backpacks but the glances are perfunctory at least, leaving many wondering what such checks are expected to achieve – other than delaying individuals long enough for more CCTV images to be recorded in some locations.

Also, troops in groups of three or four can only respond after suicide bombers have detonated explosive devices while returning fire against gunmen in enclosed spaces such as concert halls may increase the number of dead or injured.

In an interview with journalists from the country’s regional newspapers, M Cazeneuve reportedly promised an ‘exceptional deployment’ of troops and police around France ahead of the sports events.

While visitors should certainly gain some reassurance from the interior minister that 101 arrests linked to terrorist suspicions had been made in France in the last six months, the presence of troops on the streets still seems more of worry to some visitors than consolation.