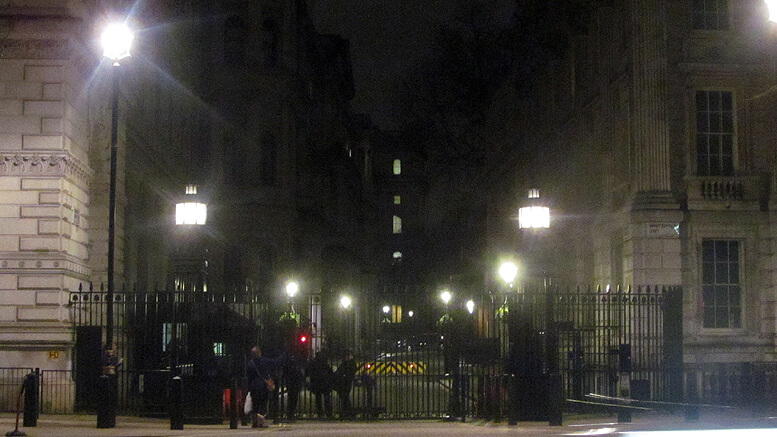 BESEIGED: UK Prime Minister David Cameron may well be grateful for the protection of gates at the end of Downing Street as he comes under attack over family financial arrangements. Picture: AsPerceived.

THE only job that UK prime minister David Cameron ever had outside politics was as media supremo for a commercial television company – Carlton Television.

You’d think that he might have learned something during that time, but it appears that his experience either did not extend to the nuances of crisis management or he has since forgotten what he did absorb.

His handling of questions from journalists and other politicians this week over his father’s links with an investment company mentioned in leaked documents about businesses registered in Panama seems to have been an exemplary display of how not to respond in such crises.

Media relations wisdom is that, in the face of the proverbial excrement hitting a fan, full and frank disclosure of as much as possible as quickly as possible is probably the best way to diffuse criticism and undermine one’s critics.

Mr Cameron singularly failed to do this, issuing very carefully worded statements after apparently being less than candid at the outset.

The ramifications in corporate and commercial circumstances can be bad, but for politicians once the ‘what’s he got to hide?’ question has escaped once, it becomes a metaphorical genie that can rarely, if ever, be put back into the bottle.

Total credibility can, because of the slow and partial responses, be destroyed for ever.

Voters and journalists can from then on ask, with some justification, that ‘ if he wasn’t upfront once, is he being honest now?’

For David Cameron, the timing could not, it seems, be worse. He needs every milligramme of credibility he can muster to try to persuade a sceptical UK electoral to vote to remain in the European Union (EU) in a referendum just weeks away, a task made more difficult by a row over government spending of £9 million to send a ‘pro-EU’ official leaflet to every household.

As well as the immediate hostility, probably making the prime minister grateful for the bastion of protection offered by the heavy iron gates at the end of Downing Street in London, the handling of this particular issue can be used to raise further questions about the basic competence of those in government.

Health secretary Jeremy Hunt and former justice secretary Chris Grayling have both faced criticism of their management abilities. Now Mr Cameron himself appears incapable of performing a task for which he should have had previous professional expertise.

Perhaps it’s slightly, but only slightly, better for some that the Palace of Westminster has a reputation for consuming rather than brewing alcohol.