PERSONALITY CLASH: The i newspaper in the UK sums up one view of Republican nominee for president Donald Trump.

Posted By: As Perceived Reporter November 6, 2016

THE key to the behaviour of United States presidential nominee Donald Trump probably lies in his schooldays, according to a writer who went to a similar establishment.

Chris Aspinall reaches the conclusion for the first edition of a new “bookazine” of contemporary journalism, AsPerceived Quarterly.

Mr Trump was educated at a rare sort of school – the New York Military Academy – where he was sent as a 13-year-old. 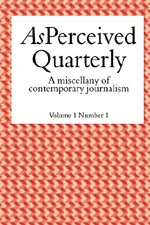 Surprisingly, when so much speculation has surrounded his background, newspapers and magazines in the US have shed relatively little light on this aspect of his life, with the New York Times and Washington Post showing most interest.

This aspect of his education sparked curiosity and clarity in equal measures for one AsPerceived contributor.

Chris Aspinall said: “I feel sorry for Mr Trump. He no longer amuses me or frightens me. He makes me weep – as I feel I have discovered a rather tragic figure behind the mask, full of pathos and reminiscent of a 21st century equivalent of Shakespeare’s King Lear.

“For many months, like to many, I have been trying to work out Mr Trump, to establishe what makes him tick, what drives him and why he behaves as he does.

“Why do I think this? Because I’m one too.

“I’m 10 years younger than Mr Trump but being at a similar institution in the United Kingdom between the late 1960s and mid-70s left me scarred and dysfunctional. Mr Trump has made me look again in the mirror after more than 40 years.”

Although much is made of university education and the Ivy League schools in the US, the role of boarding seems far less significant than it has done in the United Kingdom for generations.

“Combine a surfeit of adolescent testosterone, the absence of family affection that goes with being away at school, an environment where ‘boys’ inhumanity to boys’ makes man’s inhumanity to man look benevolent and Mr Trump comes close to falling into a stereotype, even if it’s one which is rare and consequently not fully understood,” said Chris Aspinall.

Boarding schools, especially single-sex boarding schools in rural settings, have had a reputation for producing former students who find relationships difficult to make and maintain and who, even in middle-age, may be continually seeking the parental approbation they never received as teenagers.

Cornwall-On-Hudson, home of the New York Military Academy, may be only 50 miles north of New York City, but in the late 1950s and early 60s, it was probably culturally far more distant.

To survive in such an environment with least long-term psychological damage, you either have to rebel or retreat into solitude

In the UK, the elite boarding schools have long known they have a reputation and a responsibility for turning out figures, especially men, with the confidence vital for careers in politics and government. More modest military academies and institutions would however have concentrated on developing individuals ready for the physical and psychological violence of the battlefield rather than the social brutality of government, especially during the Cold War.

The instructors drilling the young Donald J Trump each day would have been trying to instil conformity and the essential unquestioning allegiance and obedience of the military.

The 2015 biography of Mr Trump by Michael D’Antonio alleges that the budding property tycoon once punched his music teacher, blackening the man’s eye, in a contretemps over a thrown eraser.

Speculating that the young Mr Trump was more of a character than the Military Academy could cope with explains much.

To survive in such an environment with least long-term psychological damage, you either have to rebel or retreat into solitude, very quietly exploiting every loophole to preserve your sanity and individuality that was otherwise stifled and repressed.

“My guess,” says Chris Aspinall, “is that, with encouragement from his father, Mr Trump developed, and reinforced, the façade of a domineering performer, but behind which adolescent insecurity may still lurk.

“The more I see of him, the more I notice a ‘boarding school boy’. The label explains so much while simultaneously leaving much more open to question. A little has emerged about the New York Military Academy nearly 60 years ago, revealing the culture of the institution, its regime and memories for a few who passed through its gates.

“The adage that someone ‘protests too much’ may apply to Mr Trump too. He appears to be trying to fight on so many fronts at once that I can only express wonderment that he has survived for so long affected by what may be ferocious inner angst.

“I now have lots of questions about Mr Trump. I wonder if, behind the façade and despite the love of his children, he isn’t desperately insecure, lonely even. I wonder why, after so long, he gives the impression that he still hasn’t come to terms with himself? Has he wanted to understand himself or has he tried to use denial as protection for so many years? I see in him a reflection of a stereotypical boarding school boy’s inability to maintain a truly life-long relationship.

“I can understand someone continuing to fight – because they know nothing else. I see a tragic, even pathetic figure, striving for the parental approbation he never received and which he can now never achieve.”