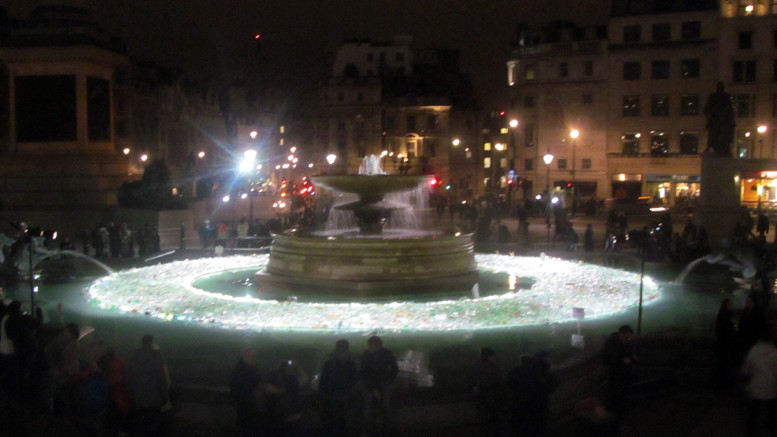 BOTTLED UP: One installation featured in London's Lumiere event involved filling a fountain in Trafalgar Square with plastic bottles.

HUNDREDS of thousands took to the streets of London over the weekend for ‘Lumiere’, an event that illuminated the capital with colourful light shows against the facades of famous building and other installations at well-known venues.

So many turned out on the Saturday evening that a major mainline railway station had to be evacuated and some of the displays were turned off because of safety fears.

Although traders reported that they had had a boost from the event, by the Sunday evening others were not so impressed.

After all the hype, the Garden of Light in Leicester Square looked tacky while hundreds of plastic bottles floating in one of the fountains in Trafalgar Square really did look like rubbish.

While colourful and quite clever, the Spirit of Light by Patrice Warrender on the west façade of Westminster Abbey looked far better in photographs than it did in reality.

Questions were also being asked about the timings – from 6.30-10.30pm – were most practical because of the disruption for weekday commuters and others operating in central London.

Some Royal Mail collections were brought back to 2pm instead of several hours later because of road closures not far from King’s Cross.

While the displays may well, in some places, have distracted drivers, having them switched on from sunset until shortly before the last Underground trains of the night would have avoided cramming all the visitors into a four-hour period – and running the event for longer than four days would also have lessened the disruption.

Although Londoners and many tourists were clearly impressed, others – especially those who missed some of the displays which had been switched off early on the Sunday – may be unlikely to return.

The organisers should probably give greater thought to the staging – as some installations in and around Trafalgar Square and Westminster felt and looked constrained by the surroundings.